skip to main | skip to sidebar

An awakened consciousness from the Deep Feminine recognizes the divine mystery in everything manifest in our world. How does it do this? In your awareness, you bridge the polarity between the focal point and the vastness of empty space by holding them both as equal. With the dynamic tension between the polarities of emptiness and the focal point balanced in your attention, the generative and creative impulse of Existence fills the space of the empty womb with Life. If we dishonor this dynamic tension, we take ourselves out of the equation of life. The dance between empty space and focal point generates the exquisite play that produces the fecundity we call Creation.

Feminine enlightenment thus celebrates the fruition of the potency of the union of the womb and seed, the empty space and the focal point. In the state of love outside of fear, emptiness fills with fullness. When you accept you are both a finite being whose physical body will die and that you are a part of the infinite play of the polarities of existence, you fulfill a positive relationship with Life. Instead of shutting down to the inevitable death of the physical body, you accept the whole journey—including the death of your body with grace. An enlightenment model balanced with feminine consciousness inherently knows everything is placed here for a purpose.

Enlightenment is thus defined by the capacity to consciously respond with gentle compassion to the unfolding drama of Life as it grows toward the awakening of all beings. It is the nature of Life itself to grow to be free to be itself. Gentle compassion to the unfolding drama of Life allows you to recognize the urge towards awakening, no matter what appearance the drama takes. An enlightenment process that includes the feminine polarity models a relationship of mutual recognition. It sees divine presence in everything experienced in the physical world. It trusts, includes, aligns, and forms relationship with the irrational, wild, seemingly chaotic forces that generate physical existence. Feminine consciousness knows that “Matter matters.” What is created awaits our recognition of the divinity residing at its deepest causal level.

With its inherent fecundity, the Feminine aspect of consciousness celebrates all the physical expressions of Life. It celebrates family and relationships, food, children, water, sky and all living things. It celebrates that we are all here together and finds the sacred in everything. It is full and rich and pregnant with the beauty of life. It knows Divine presence would never create this world if it were not to be enjoyed and consciously celebrated. It is time for our human race to reclaim its innate capacity to create and to be in a sacred enlightened relationship with Life.
Posted by Ruth Goodman at 1:24 PM No comments: Links to this post 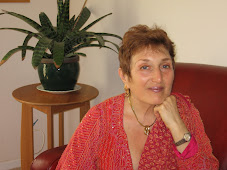 Ruth Goodman
I am a teacher of conscious embodiment, utilizing the expressive capacity of the breath, voice, and movement to help people recognize their own mastery. For over thirty-five years, I have explored the realms of the body, movement and spirituality. My body-based exploration of consciousness began with studying dance therapy at NYU’s Health and Healing Professions Master’s program in the seventies. I am also a California licensed acupuncturist with a private practice of intuitive energy healing. In my work, I guide people to attune to the internal river of life energy arising through the core of their own body. For more information about me, please go to my website, www.ruthgouldgoodman.com.